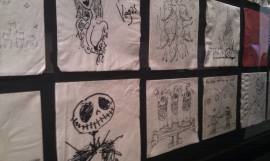 Today, Friday, was my final day for visiting Paris. To cross one more thing off my bucket list before I leave, I met up with Laura once again and we went to queue (for 45mins in the cold and with only a Twix for company) for the Tim Burton Exhibition at the Cinémathèque Française. This museum is located in Bercy in the south-east of the city and is home to a large archive of films and film-related objects, as well as a cinema, a restaurant and an exhibition hall.

The Exposition Tim Burton is running until August 2012 and is a celebration of the American film director’s artistic career. On display are literally thousands of his hand-drawn pictures of the characters from all of his films, books and animations – some of which have turned into the characters we recognise well today and some who have never made it to the big screen and have almost been long lost. From looking at all

Burton’s pictures it’s obvious that he’s a man who can’t sit still and has to doodle at every opportunity. The walls of this exhibition aren’t covered in canvases, ornate frames and fancy art materials like other galleries – here there are pages torn out of notebooks, monsters drawn on hotel-branded writing paper and an entire wall full of napkins covered in characters drawn in different coloured biro pens. Whilst he has also done some incredible paintings, most of Burton’s artwork is done simply in coloured pencil. It’s so basic that it becomes quite spectacular.

Towards the end of the exhibition are figures, drawings and props from some of Tim Burton’s more famous

creations – films such as Corpse Bride, the Nightmare Before Christmas, Sleepy Hollow, Alice in Wonderland, Charlie and the Chocolate Factory, Beetlejuice and Edward Scissorhands all feature – including the actual suit and scissor-laden glove that Johnny Depp wore when filming the latter, and the set of barber’s blades used by the same actor in Sweeney Todd. It was definitely a very interesting and inspiring exhibition to look round – I came away from it feeling quite creative and also astounded by how productive one man could be in a lifetime. Perhaps by the time I’m his age my collection of hand-sewn items will be just as impressive!